The ruins of Mound of Rukunuddin are situated in deh Rukunpur in between village Shaikh Rehan and Shaikh Rehan necro olis (about 5 kms east of village Puban Sharifs). Due to overall negligence on the part A of concerned departments, 3 large area of this historical site has been encroached and occupied by the local zamindars, causing immense loss and setback to this heritage lace. A large deposits of earthen pottery also lie scattered all around. It is necessary to mention here that yet another important historical site of Hingorani Syeds in Tando Fazal is located near to this area. Hence, it can be concluded with considered opinion that both of these two historical sites are interlinked with the historical site of Hingorani Syeds in Tando Fazal. 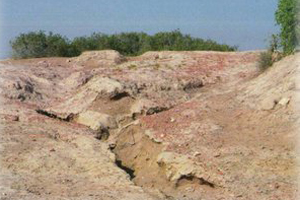