Hotchand Punjabi Water Trough, on the old Miani Road near Siroghat IS yet another monument of same kind which confronts with almost similar situation of deterioration and public callousness. Like the one at Pucca Qila, this trough is covered with a shade. The stone affixed on the top reads as: “In memory of Seth Navalrai Hotchand Punjabi, died 13 June, 1937”, while the stone affixed on the pillar bears the inscription which reads as: “OM, Under the auspices of SPCA Hyderabad, erected in Memory of Shrimati Lakshmi Bai Jeramdas by her son R.S Dr. Tarachand Jeramdas”. 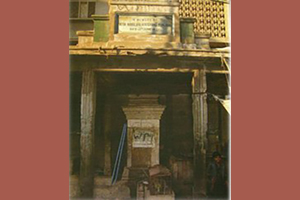