The ancient graveyards of Hazrat Shaikh Rehan and Shaikh Qutub are situated about 5 kilometers in the South of the village Puban Sharif, deh Rukunpur (taluka Hyderabad rural).

The nechropolis of Shaikh Rehan, which spreads over 100 acres, houses graves of different periods with varied architectural design. In the middle of the graveyards lies a compound containing the graves of Hazrat Sultanul Aulia Shaikhul Mashaikh Sultan Syed Ghayasuddin Shah Alvi Qadri, popularly known as Hazrat Makhdoom Shaikh Rehan Jigri (b. 531 Hijri – d. 638 Hijri) and his family members including his wife, mother and some ardent follwers. His father’s name was Makhdoom Sultan Fakhardin Shah Alvi Qadri. He was the Halifa of Ghous e Azam Hazrat Abdul Qadir Jilani Baghdadi.

The ancient graveyard of Hazrat Shaikh Rehan is surrounded by over a century old kundi tree dotted with ancient graves of different periods and architectural outlook except a single existing carved stone grave (which is though) plain and containing no inscription) while the vast majority of graves are constructed with red bricks. Some graves are constructed with cut work bricks while the few surviving graves bear the traces of artistically designed red bricks (which have been dumped over the graves haphazardly by the custodians of graveyard). The entire graveyard premises is littered with stone boulders and bricks of different sizes and shapes. As contrast to the Shaikh Rehan graveyard, the ancient necropolis of Qutub Badshah spread over comparatively a small area containing two different compounds of graves each known after by Qutub Badshah and Shaheed Dodo Haqqani (both brothers and son of Hazrat Shaikh Rehan). Besides this two unknown carved stone graves (though in depilating condition) still exist in the graveyard. The grave compound of Hazrat Qutub Badhshah houses eight graves (though without grave stone). While the chamber containing the grave of Shaheed Dodo Haqqani lies at a brief distance. This striking feature of these three grave compounds is that all are without roof cover. 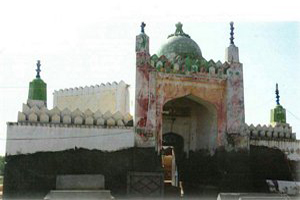 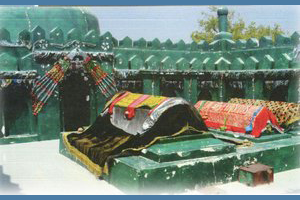 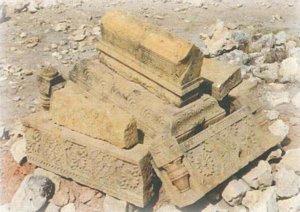