The ruins of an ancient mosque believed to be of Kalhora period, is situated in the outskirts of Hyderabad, near Tando Alam Oil Field (Deh Widh, UC Tando Hyder). Its central dome is hemispherical while the two are vaulted in shape as appear from the destroyed structures. The thickness of its walls is unusually small. A large portion of the building is buried. The mosque is surrounded by ruins of an ancient mound, which is known as Shaikh Aqib Ja Darra. The ruins spread over 14 acres, most of the area has been encroached and irrigated by the local zamindars. The mound is heavily saturated with deposits of broken pottery and stone. 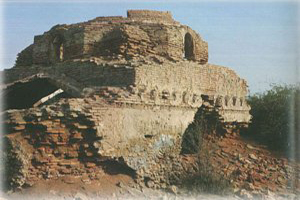