About 20 kms off Golarrchi town in the north lies the dargah of Hazrat Mehmood Faqeer Nizamani, who was the diehard devotee (Khalifa) and a right hand man of Hazrat Pir Muhammad Rashid Rozay Dhani (R.H). The dargah is situated in the village now called as Karrio Ganhwar (Deh Karrio and UC Karrio). He was the resident of this area and constructed a mosque (which is situated besides his mausoleum) and also worked as its Pesh Imam for 12 years. His tomb was constructed by his disciples from India. The shrine houses four more graves which are in a marbled courtyard. The grave of Khalifo Mehmood bears inscriptions as under:” Hazrat Khalifa Mehmood Bin Ganhwar Khan, born in 1189 A.H and died on Rabiul Awal 1267 A.H”. to his left are the graves of his son Khalifa Haji Lutfullah and Khalifa Abdun- Nabi his grandson (son of Khalifa Lutfullah) while on the right side of his grave are the graves of his an other son Khalifa Haji Abdullah and a grandson Khalifa Mehmood Sani alias Wadal (son of Khalifa Haji Abdullah). Three more unknown graves are also situated inside the tomb but are out of courtyard.

The dome is octagonal in shape, which for the first time undergone repair and renovation work in 1943 which was performed by a mureed of dargah, Haji Abdul Qudoos Rajarr.

The remains of an old well in the premises of the mosque which was presumably established by the Khalifa Sohib still exist. The well happened to be the only source of clean drinking water for whole the area during old times. 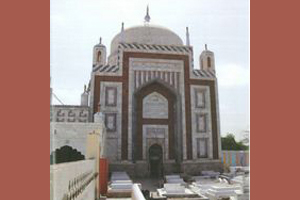 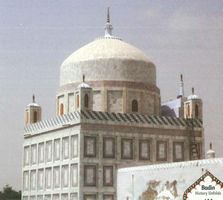 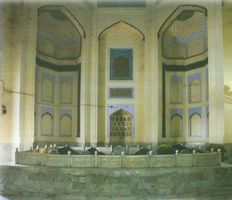 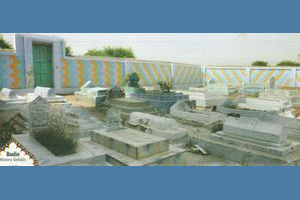 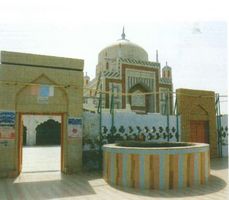