Dargah Ahmed Rajo is situated about 31 kms off in the south of Golarrchi town near the sea shore. It is located in deh Ahmed Rajo 2, Union council Ahmed Rajo and the village Ahmed Rajo, which is inhabited by Rajo clan in large number . The devotees of the shrine while visiting it compulsorily bring along themselves a piece of earthen jar used in the toilet. And hence the shrine has achieved the title of 'Kounran Warn Pir' or the 'Fir of Lota'. People visit it with their desires to be fulfilled and they choose it the best way to seek the blessings of the Pir by carrying along lotas which are dumped in a corner after the attendance at the mazar. This tradition is carried through since the remote past, locals believe.

The shrine is a recently built construction which also houses the grave of Ahmed Rajo’s sister Dadi Aas Bai. It is looked after by the Oqaf department and a Musafirkhana in the premises of dargah was built and inaugurated by the then Sindh Chief Minister, Mr Mumtaz Ali Bhutto. No concrete information is available about the Pir. Khalifo Umar is the custodian of the dargah and on every first Sunday night of the new month the mela takes place in the premises of dargah which is attended by the devotees in large numbers. During the rains of 2011 the area was completely devastated and some leading NGOs have undertaken development schemes in the area and the local populace has been facilitated with necessary amenities. 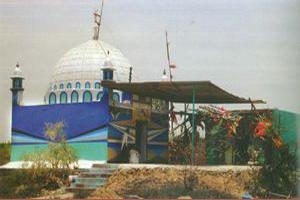 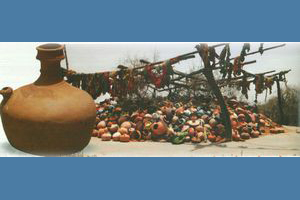