Sehwan Fort (or Kafir Qila) is located at Sehwan in Sindh. The Fort is said to have been built by Alexander the Great and, hence, is also sometimes known as Alexander's Fort in Sehwan. It has massive brick-work like that of Kalankot Fort in Thatta. Sehwan is situated on the right bank of River Indus at a distance of 135 km from Hyderabad. It is an old town of pre-Islamic period.

The ancient fort lies north of the town and is a massive burnt brick structure laid in mud mortar. The core of the fortification wall is filled with puddle earth. The defensive walls are roughly rectangular in shape, with traces of machicolations (a floor opening between the supporting corbels of a battlement, through which stones, or other objects, could be dropped on attackers at the base of a defensive wall). At the top of the fortification ground area there are modern structures built by Sindh Government. At the side of the Fort area, there are deep ditches dug by French Archaeological Mission in collaboration with Federal and Provincial Archaeology Department.

There is a tradition at Sehwan that the fort was built by Alexander the Great. But there is other evidence to show that the fort had existed before Alexander came to India and it he may have repaired it to suit his army requirements. The arches of the fort and other characteristics are oriental and not Grecian. The brick-work, like that of Kalan Kot Fort in Thatta, and the name "Kafir Qila" also points to the fact that Sehwan Fort may have been built during Hindu Rule. [Source: Discover Pakistan] 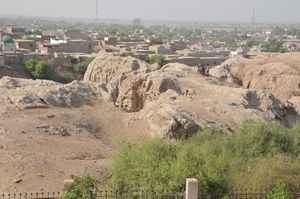 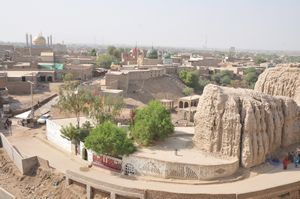 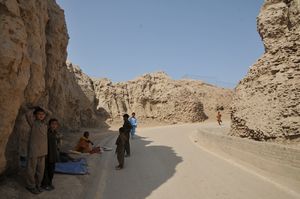 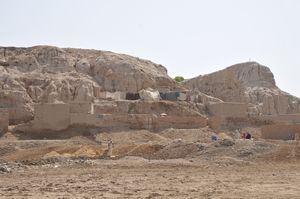