The origin of many historical places in Sindh is still unclear and much thought has not been given to the background and name of these ancient places due to the unscientific research and unreferenced opinion of research scholars and historians.

The same is the case with the so called ancient resting place of Derya Khan of Sama Sultan dynasty lying between Gopang railway station and Khasai Shora clan's village in Jamshoro District at a distance of 65 kms from Jamshoro. This site is known as the resting place (Bethak) of Qabooliyo Khan Samo who was given the title of Mubarak alias Doolah Derya Khan Martyr by the well known archaeologist Syed Hakim Ali Shah Bokhari and historian Dr Professor Ghulam Muhammad Lakho. Derya Khan was a minister and enjoyed the position of prime minister of Sultan Jam Nindo alias Jam Nizamuddin Samo who succeeded to his legacy in 1490AD. There is a controversy regarding the name and tribe of Derya Khan in the history of Sindh. He fought against the Arghons and was martyred in 1521AD. Jam Nindo Khan was so pleased with him that he allotted him Jagirs at village Talti near Bhan Saeedabad (now Jamshoro District) and village Gaaha near Johi (now Dadu District). Both the villages still exist near the banks of Manchar Lake.

According to books, Tuhfatul Kiram and Janatul Sindh, on the history of Sindh, he settled at village Gaaha near Johi, where he established a madressa for religious teachings. The madressa was so famous that scholars like Molana Yar Muhammad Abahri, Molana Aseeruddin Abahri and Abdul Aziz Abahri came from Hirat and taught here. The village Gaaha (now Syed Bahar Ali Shah) is at a distance of seven kilometres from Johi. The Autaq (resting place) is approximately 160 km away from the afore-mentioned villages.

It is also said that the so called Autaq of Doolah Derya Khan is a religious place of ancient time. The construction of the building and the place itself suggests that it is not an Autaq, Bethak. In the history of the subcontinent and even of Asia, there is no reference to such type of constructed resting place (Bethak or Autaq) with dome. Without any reference and scientific research this old religious place has been related with Doolah Derya Khan.

I think it is the Shiva Temple, as its construction resembles the Shiva Mandir near Manjhand, though this temple or ‘Tikano' is older than the temple or Shivalo near Manjhand. The front side of the temple is towards the south-east and the back is towards the north-west. The temple is surrounded by a compound wall and has three portions. The portion with the dome is in the centre. The thin bricks are held together with gypsum (cheeroli) material. All the entrances are arched. At present this heritage site is in a dilapidated state. Only the domed portion exists, which, it is feared will soon be destroyed. Not only should the historical record be corrected but this heritage needs preservation. 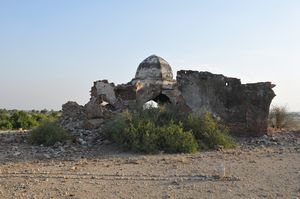 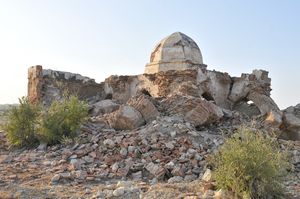 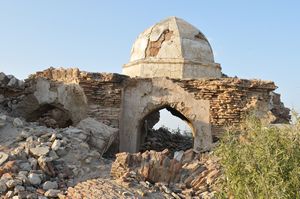 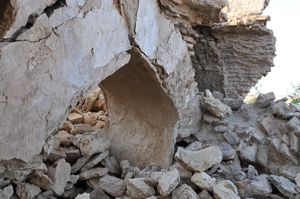 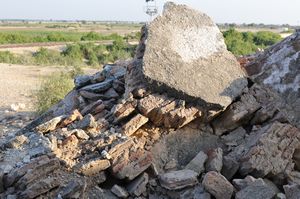 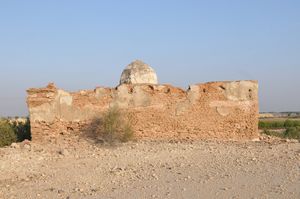