﻿The graveyard is known as 'Baloo Ja Quba' named after Bilawal Faqeer Zardari, a warrior, statesman and diplomat of Kalhora rulers and also saint of Kalhora period; who fought numerous battles against the enemies of native forces. The tomb upon his grave was built by Mian Ghulam Shah Kalhoro in village Meer Khan Zardari. 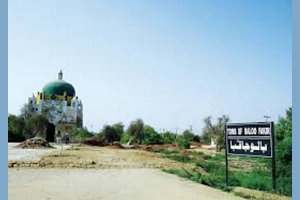