﻿The tomb of Mai Chagli, the wife of Malik Pahar Khan, is also situated in the boundary of Government Degree College, Kotri, District Jamshoro. Mai Chagli was the mother of Malik Izzatyar Khan, a general of Mian Ghulam Shah Kalhoro. The tomb is also constructed with Islamic style of architecture and kashi tiles. 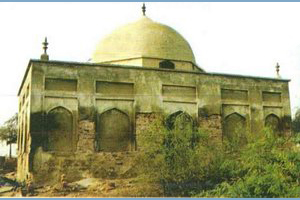