﻿Comparatively a low profile and a common graveyard on Rohri bypass (near to railway underpass) houses graves of many known or the unknown deceased of communities inhabiting around it. However, the necropolis shot to its popularity when bullet riddled corpses of one time notorious and hardened dacoit Nadir Jiskani and his accomplices were brought for burial. Nadir Jiskani was among the gang of 40 under trail prisoners, who escaped from Central Jail Sukkur in a midnight operation on March 23, 1985. The escape of hardened criminals in a massive jail break operation seriously disturbed the law and order situated of the entire province of Sindh during the preceding years. Killing, kidnaping, maiming and murder became the order of the day, despite the fact the entire country was under military rule led by Gen. Ziaul Haq, Nadir Jiskani was allegedly killed in an staged police encounter near Tando Allahyar in 1987. Two more his accomplices viz: Shahnawaz alias Shano Jiskani and Bakhshal Gadani are also buried to his left and right sides. Some fans of Nadir Jiskani regularly pay visit to his grave and place wreath over his grave. At present, Nadir Jiskani's family lives in Tando Allahyar and his daughter was graduated from University of Sindh, Jamshoro. 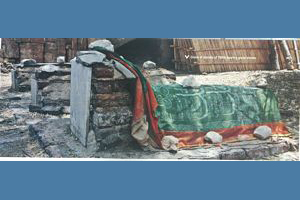 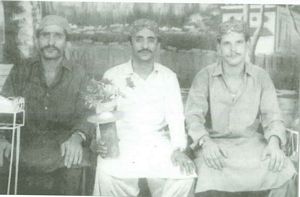