At least 5 kilometers off Choondko town in the east lies a brick tructured fort in the village of Sorah. The fort is situated on the sand dune and is occupied by the Pakistan Rangers. Military experts believe that the side chosen foe building a fort on the present location was most appropriate and the movement at nearby border can also be mentioned easily. The fort was built and inaugurated in 1944 and the commemorating stone bearing on the outer wall of the fort inscribed as follows:

Series of similar constructions were made in the long desert strip leading upto Khenwari during the same period by the colonial administration for the purpose to effectively cape with the indigenous insurgencies. The first among them in the area was the famous Hur Movement which by and large weakened the writ of the 'Gora' rulers in the area. At Tajal, a rest house meant for irrigation inspection staff was already functional since its construction in 1926, however, a new fort was constructed besides it. Soon after the departure of "Gora" rulers, the local population attacked it and was razed to the ground. While at the tail end of the Nara Taluka lies the identical structure with the same layout & design, called as Khenwari Rest House. This building was also inaugurated on the same date and the stone bearing on the wall inscribes as follows: 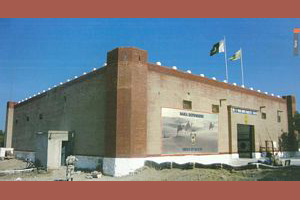 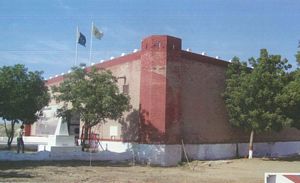 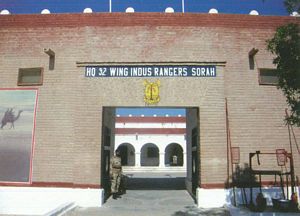 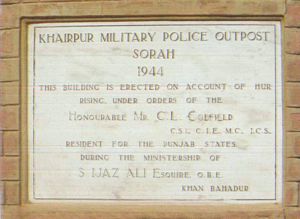