Faqeer Nanak Yousuf Khokhar (1792 1845) is regarded as the spiritual son of multi lingual poet Hazrat Sachal Sarmast. He was son of Molvi Muhammad Hashim Khokhar, a great scholar of Arabi and Persian, who migrated here from Jhal Magsi, Balochistan. Though the parents of Faqeer Nanak were the disciples of Dargah Hingorja but their spiritual inclinations didn't influence him and instead he opted his own path and became the Tayib (disciple) of Hazrat Sachal Sarmast. After his initial religious education in the area he adopted the life of a budding sufi and went closer to Sachal Sain. In his close association with Hazrat Sachal Sarmast culminated when the people of the area began to call him the spiritual son of great sufi poet Hazrat Sachal Sarmast. Like his mentor he was also a refined poet of Sindhi, Siraike and Hindi. One of his compilation of poetic verses was undertaken by late Dr. Tanveer Abasi and was published by Sindi Adabi board way back in 1980 entitled as Nanak Yousuf jo Kalam. After the demise of his father he went make to his native town Jhal Magsi and looked after the Madrsa of his father for quit sometime. The rulers of the time made him Mufti and his salary was also fixed. The main entrance of the newly constructed mausoleum bears one of the couplets from his Kalam as:

The old mausoleum of Faqir Nanak was built by Mir Ali Murad Khan Talpur-l, which was recently demolished. He was a tall man and use to carry a long steal bar called "Beragin" it is almost a 5 feet long and is displayed in the mausoleum. The mausoleum of Hazrat Nanak Yousuf which is situated in village Agra, Taluka Gambat on the left bank of river Indus houses as many as 14 graves of his family members which included four sons, a daughter and five grandsons. The annual Urs of this sufi poet is celebrated on 8th Jamadul awal. Nanak Yousuf had 4 sons: Muhammad Younis, Jhandal, Abdul Rehman and Noor din except Jhandal who was issueless while Muhammad Younis had a son named Bakht Ali Faqeer, Abdul Rehman's son was Hadi Dino and Mola Bux was Noor Din's son. 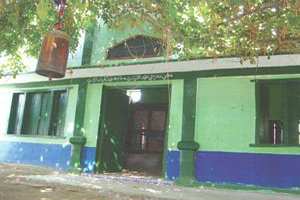 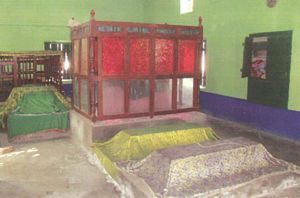 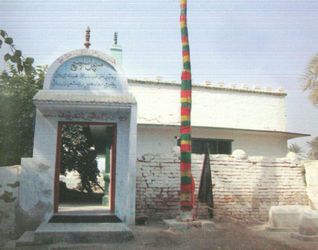 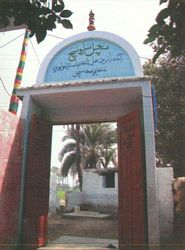