Piryaloe's one of the narrow streets leads us to the town's yet an other old temple called Darbar Jhandoolo Sohib, which is again the victim of vagaries of demolition of valued architectural monuments. During the course of its demolition and reconstruction some years back, the old tiles recovered from it also contained the same inscription: "Ganesh Tiles Sukkur, 1837", disclosed Mr. Mahesh Kumar, out guide in the town.

Like Marrhee Mandir, Jhandoolo temple has also many names to its credit such as Hanooman jo Mandir and Kirishna etc. Mahesh Kumar commenting over the name "Jhandoolo" (originated from a Sindhi word Jhand means long hair) said that during earlier times here lived a faqeer with long and luxuriant hair and that is how this temple began to be known as Jhandoolo. The importance of this temple is that it houses old sacred books of Hindu community. 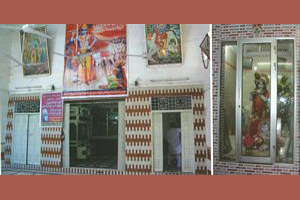