The Jamia Mosque Noor Shah in Shahlyani Mohalla is one of the last surviving historical architectural monuments of the town. It was built by Syed Noor Shah in 1936. He had great following in Sindh and the adjoining parts of Balochistan. The mosque was recently completely demolished and only its front elevation and two minarets were spared due to paucity of funds. Syed Noor Shah Bukhari, the mohtamim of the mosque explaining reasons for demolishing the old structures of the mosque constructed by his grand father said that it grown weak and its fragile structures posed threat of carving in. he further demanded from the provincial authorities to help in constructing the madarsa besides the mosque which was also demolished during the renovation of the mosque. The wooden doors of the front elevation have been uprooted and placed inside. 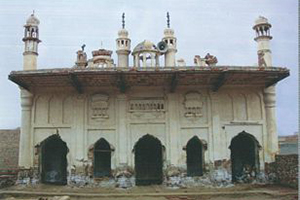