Over a century old two storied haveli in village Ali Nawaz Panhwar (in between village Sardar Adam Panhwar and Abad Railway Station) is a deserted place. The haveli was built by Sajjan Khan Panhwar, an elder of Ali Nawaz Panhwar, more than a century ago. The wood work used in its front elevation has been badly damaged and destroyed due to the sheer negligence of the residents. It is no more in use due to the influence of spirit. According to the "Blue Book of Jacobabad", Sajjan Khan also built a school in the village, however, it is no more visible in the area. Besides the haveli, there lies an otaq, which is equally a good architectural piece. It has 4 rooms, which are internally connected with each other through a common door. The otaq was undergoing repair works while we visited it. It has a vast veranda. A stable of horses is also located in the premises. 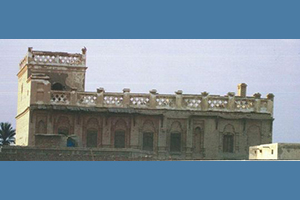