﻿This law college was established in July 1954, with the assiduous efforts of late Agha Badar e Alam Durani, who was then working as President District Local Board of Sukkur. Initially, the college began its function in the premises of District Local Board. Syed Mazhar Ali Shah was appointed as its first Principal. The college was inaugurated by Mr A.K. Brohi, then Federal Minister for Law. The District Local Board of Sukkur continued its funding for the college for two years. This made its founder, Agha Badar to spend sleepless nights and determined to reopen it with the collective efforts of college s visiting faculty and the Principal Mr. Mazhar All Shan. On July 9,1956 college was registered with the assistant registrar of the Joint Stock Company, Khairpur Region and Syed Mazhar Ali Shah was elected the first chairman of the society.

The law college, under its new name of Sukkur Law College, started functioning from July 20,1956 in District Local Board premises with permission granted by the late Agha Badar e Alam Durani, President of the District Local Board. Syed Mazhar Ali Shah continued as Principal of the college. Since then the Law College has undergone the process of changing its nomenclature for couple of times: once after its first principal, Mazhar Ali Shah, and again after Agha Badar e Alam Duram. The Sukkur Law College Governing Body continues to function under the chairmanship of the Vice-Chancellor of Shah Abdul Latif University, Khairpur, with which the College is affiliated. 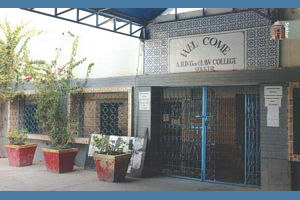