﻿The shrine of Rajsen Soomrani is located 4 kms south of Nindo Shahar (town) in Tando Bago taluka. Rajsen Soomrani is believed to have been a deputy (khalifo) of Hazrat Bahaudin Zikriya Multani. The tomb has been recently constructed.

Series of devastations that virtually ruined major portion of District Badin, during the brief span of a decade is generally attributed to schemes of LBOD that passess across the whole district, is a major concern for the entire populace. During the torrential rains of 2011, almost whole the district of Badin was affected. A large number of precious lives were also lost and the properties worth billion of rupees were damaged. Following the unabated ravages of LBOD drain, the local residents are up in the arms against the design and the feasibility of controversial drain that falls into the Arabian Sea. 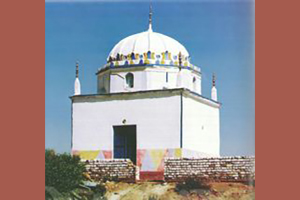