﻿A small road originating from the main Hyderabad-Badin road near Peeroo Lashri leads to a pilgrimage site known as Mukhdoom Nooh Jee Kuni. Thousands of devotees converge here on the occasion of annual urs. The devotees usually converging to the site in the morning & necessarily before the Zuhir prayers. All the devotees began rituals after prayers that continue until Fajir prayers of the next day. Finally they proceed to the nearby graveyard of Ashabis (companions of Prophet Hazrat Muhammad PBUH) and after offering fateha, the annual gathering stands concluded and all the pilgrims finally set out to their destinies. During their stay, the devotees compulsorily complete the cycle of five times prayers together. It is said that the devotees of this religious centre mainly spread in Laar area. Hardly at a distance of two kilometers lies an ancient but deserted graveyard, where, according to a belief four Ashabis or the companions of Prophet Hazrat Muhammad (PBUH) are buried. A recently built chamber contains more than a dozen graves, which do not bear any grave stone. It is situated in deh Noohabad. The place where pilgrims converge and spend at least eighteen hours together as per the ages old tradition and offer prayers, is an ancient site with a mosque resembling to that of Bhodesar in Tharparkar district. It is situated near the village of Mian Malook Jonejo via Ripp Sharif. During the stay of pilgrims the Kunni or the one time meal is served by the local generous people. The mosque stands on an about 6 feet high platform. It's a mixed work of stone and brick masonry. Its wooden ceiling is supported with wooden beams placed in close distance. It comprises only a prayer hall which is about 45 feet long and 14 feet wide. It has wind catchers in its mehrab. One of the wooden beams bear the name of carpenters as Allah Bachayo and Mithan Gopang. The mosque has an extensive courtyard where the devotees assemble in large number only one's a year. Except this annual congregation, the mosque remain deserted for rest of the year. The adjoining areas are also rich in artifacts and broken pottery shreds that lie scattered all around in abundance. 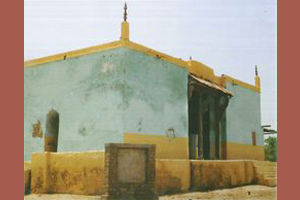 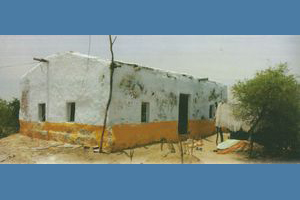 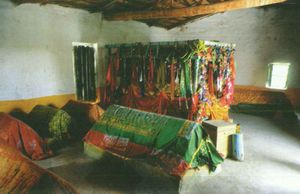 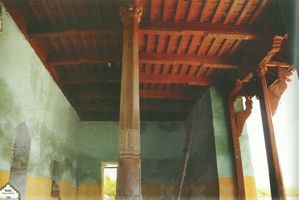