﻿Locally it is called as the Aasaili Jo Darn or the Mound of Aasaili. The ancient site is situated in Deh Jhabero, Tapa Kandiari and Union Council Rahooki, about 20 kms off Badin town on main Golarchi road near Pateehal. The mound spreads over a dozen of acres which has been encroached by the locals and converted it into a permanent living place defying existing antiquity laws. The mound is inhabited by Jat and Sameja communities.

Way back in mid 1990s, the community men during the spade work on the site for intending to establish a mosque, miraculously found the structures of a building constructed with burnt bricks. Upon finding those structures, they further carried out their work consciously and went on excavating the building like archaeologists do and one day they dug out a complete structure of an ancient mosque and made it functional without bringing any alteration or addition in it. It is still without roof and comprising over a small prayer hall measuring 8 x 25 feet long, which has three doors. The thickness of the wall was measured as 3.5 feet. Muhammad Hashim Jat, who excavated the mosque claim that they also recovered seven human skeletons from the site, which were extra ordinirarily big in size and were buried at a nearby place. He further claimed that few metallic coins inscribing various figures and words resembling to the figures 830, 881, and Muhammad Shah were also recovered during the course of excavation of the mosque. According to him the recovered coins were handed over to the officials of Sindh Culture Department. The whole site is highly saturated with broken pottery shreds and brick bats. 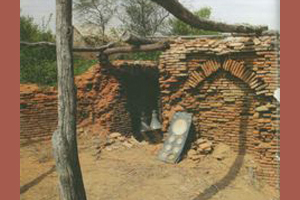 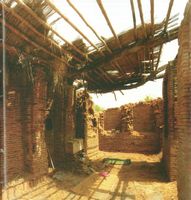 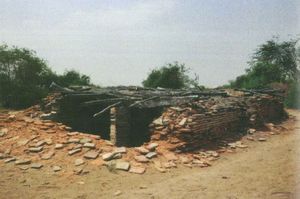 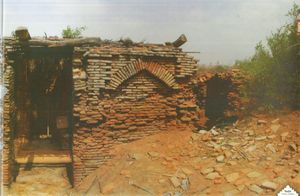