﻿The ancient graveyard of Shaikh Zakaria is situated on Open Jail road off Bhugrra Memon road in deh Jakhralo near village Sayed Muhammad Shah Sacho Sayed. Besides the single domed tomb of Shaikh Zakaria, a vast ancient graveyard is spreading over an area of about 16 acres and the ruins of a fort like structures are also visible at some places. A major portion of this ancient site has been encroached by the local Zamindars violating existing laws meant for the protection of historical sites from any encroachment. Most ironically during the recent survey of ancient sites of district Badin, conducted by a government department, this site couldn't be demarcated probably due to ignorance. A good number of graves of burnt bricks with cut work also exist here. The debris of carved stone graves also found spreading in the graveyard. The tomb of Shaikh Zakaria, which is circular in shape houses three graves including a son and a grandson. Syed Mehmood Shah a nonagenarian custodian of the shrine claims that the revered saint belonged to Pak Pattan area of Punjab. Shaikh Zakaria was the disciple of Hazrat Bahauddin Zakaria led Suhrawardi school of thought and like others he was also deputed to travel to this part of the province to spread the ideology of his 'Murshid' (mentor). 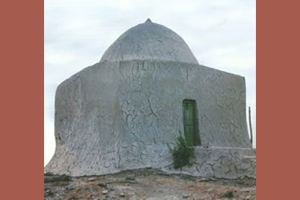 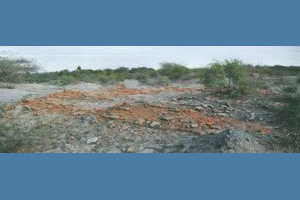 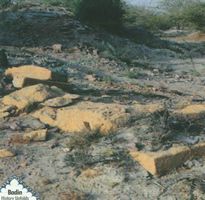