﻿The ruins of Khuree Kot near village Muhammad urs Khaskheli via Sur Anjam Farm and Mithi-3 spread over about 4 acres of land. The ancient site is about 5 kilometers away from Kadhan town and is situated in Deh Jhanjhlee. The structures of the fort are intact and it is surrounded by as many as five bastions. It is a square shaped and a large deposits of pottery shreds spread all around its premises. The fort has been occupied by the rain affectees. The occupants have recovered a large number of objects and utensils of burnt clay as well as the iron. Abbas Ansari, a shop keeper, digged out a metalled object and a clay jar. He further claimed that people here off and on find many artifacts and threw them away utilized. The bricks used in the ancient construction are exceptionally large in size. Most of the portion of this site has already been occupied by the local people and has been irrigated for agriculture purpose. Ali Nawaz Khaskhaili, the tapedar of the area claimed that some time ago people discovered a human skeleton from the site which was extraordinarily big in size. 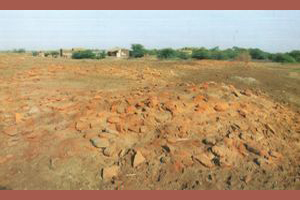 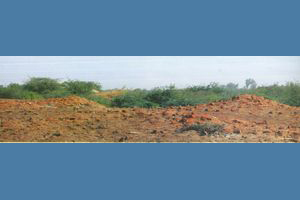