﻿The shrine of Hazrat Pir Nawal Mashaikh in the vicinity of an ancient graveyard in the periphery of Sultanpur town is a main religious place in the area, where the devotees usually throng in large number and offer their respects. The architectural design of the tomb is very much identical to the tombs of Suhagin, Duhagin (at Arore), Pir Baid in Cheechro and Shaikh Laloo in Joonas.

The resemblance in architectural design of the tombs suggest similarity of period and their relationship. Some of the remaining moulded brick works on the tomb of Nawal Mashaikh provides ample evidence of its co-relationship with other such tombs in the area.

The dome of the tomb is in original shape however, it has been badly plastered from outside, causing adverse affect to the ancient outlook of the monument. Except the front elevation of the tomb, all the three walls have been repaired and plastered. The tomb contains as many as seven graves of unknown people. All the four corners of the tomb are decorated with honey combs.

The shrine is surrounded by an ancient graveyard. The graves built with baked bricks with delicate cut work on their sides is at the verge of complete destruction. While the local communities making most of the opportunity are using the bricks lying in heaps for their purposes. The graveyard spreads over a large area and is covered with dense forests of wild trees such as Khabarr and Kandi. 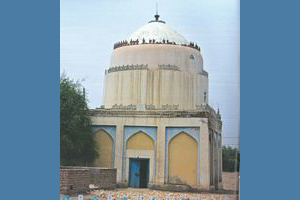 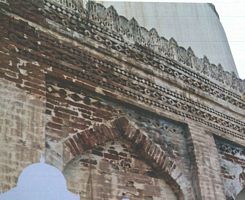 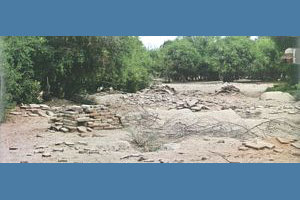