﻿Sadaf Cinema, was the only source of entertainment of its kind for the town as well as the areas surrounding to it. It was without roof and only night show was used to be arranged. Only on Eid days it could hold matne shows. Sadaf Cinema was famous for exhibiting Punjabi films. Following the over all decline in cinema business, Sadaf Cinema also eventually lost the charm as well the business which led to its closure. 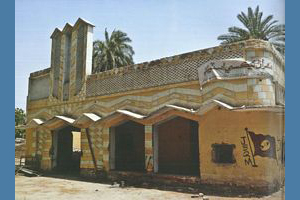