﻿The ruins of an ancient mosque of deserted township of Nindapur in between Salhani minor and Kamal Wah on National Highway, near village Bhellar, couldn's attract the attention of heritage preservationists or the concerned government agencies despite the fact the monument belongs to Samma period. The ruined monument is located in Deh Nindapur (the nick name of Samma ruler Ja Nizamuddin). It is said that this area happened to be human settlement dating back to Samma period. It used to spread over a vast area, however, due to official neglect most of the area has been encroached by the local for agriculture purpose. It is also claimed that during the course of cultivation around the mosque, valuable artifacts used to surface and collected by the locals. 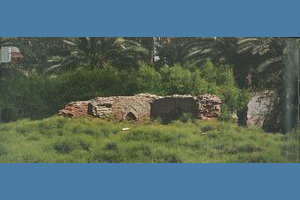