﻿Mound of Girharr is situated at about an hour's long speedy drive (specially vigo like vehicle) off Choondko town in the east. The site is very close to Bhanbhro village and Well No. 9 of OMV, adjacent to it is Doongar Mangrio village. The mound is situated on a sand dune. It is richly deposited with pottery fragments of ancient times, almost identical to those found from Kot Diji ruins. The area spreads over few acres. The locals have their own version about the site. They say that, during unknown times there was a person named Girharr, who had a dispute with his sister named Koonji, which led to their separation and consequently it brought a disaster. The village Allah Wasayo Bhanbhro is also near to this site. 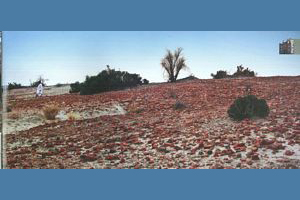