﻿Trighati Mosque in old Sangrar is a unique architectural masterpiece of Mughal period, comprising single dome. The mosque's prayer hall is connected with a grave chamber containing two graves, each of Faqir Ahmed Kaki and his nephew. Faqir Kaki was believe to be the Dargah Nasheen of Pir Chuttal Shah. The ruins of Tajar (vaulted chamber), besides the mosque, was once used as travelers resting place. It is also believed that Hazrat Shah Abdul Latif Bhittai, a great sufi saint of Sindh was also the frequent visitor of this place.

The grave of Chutral Shah, a saint of unknown period is also situated in the premised of this historical mosque. Henry Cousens in his famous book "Antiquity of Sindh" has also mentioned the grave of Chuttal Shah with coordinates. Hazrat Chuttal Shahs grave has recently been reconstructed. Yet another ancient mosque in the Trighati Village was demolished and reconstructed recently. 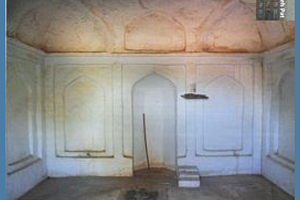