﻿Syed Haider Shah Haqani Rizvi, a great religious scholar was born in 1509 A.D. in Bakhar. According to genealogy of Rizvi Sadats, his actual name has been mentioned as Syed Mir Hassan son of Syed Moosa. He spent most of his life in his native town and received religious education from great scholars of the time.

Later on his parents shifted to Rohri. It is said that the Holy Hair of Prophet Hazrat Muhammad (PBUH) was brought to Rohri in 1545 A.D. through nis efforts. Shaikh Abdul Baqi, who brought this Hair, was the friend of Haider Shah Haqani.

It is said that in 1572 A.D. Syed Haider Shah Haqani, had an opportunity of meeting with Hazrat Imam Hussain (RA) at the very place where his shrine is existing. An ancient mosque was existing at the shrine place, which was later on demolished. At the time of ziarat of Hazrat Imam Hussain (RA), he was accompanied with his son Abdul Sattar ana nephew Sved Abdul Muali Bin Shah Essa. Syed Haider Shah aqani breathed his last in 1630 A.D. The shrine is situated in Karbala Maidan, opposite Aza Khana Najfi, Rohri. 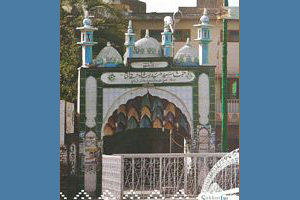 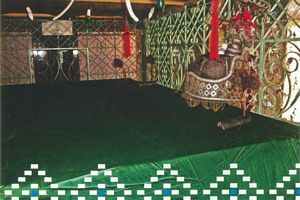